First, let’s take a look at which are the mainstream communication standards of the Internet of Things (IoT). 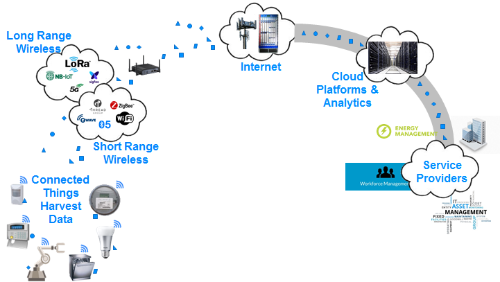 *2: Short Range < 100m, for example, ZigBee, Thread, Z-Wave or Bluetooth From the table above we can clearly understand that wireless communication needed for terminal devices with sensors to collect data is more of a short-range solution, so we think that providing a set of short-range reference design module that is easy to develop and equipped with data communication security consideration features will be very helpful to the industry. Among the many standards that comply with the IEEE 802.15.4 standard, such as ZigBee Pro, Thread and RF4CE, we discovered that the development of Thread has the most potential. The reasons for this include the following: (1) Supported by major companies such as Google, Arm, and Samsung; Apple also joined the Thread faction in 2018. (2) IP-based protocols can be easily integrated with software communication protocols. (3) Devices that are highly standardized, highly interoperable, highly secure and suitable to use the battery to supply power. The figure below is the forecast statistics for market development.

From the figure above, we can see that applications based on IEEE 802.15.4-based protocols are expected to grow, and mainly centered on ZigBee and Thread; Thread in particular. In terms of application, based on the market research data, Smart Home, Medical Devices, Auto Metering, Smart Building, and Industrial are the main application fields. 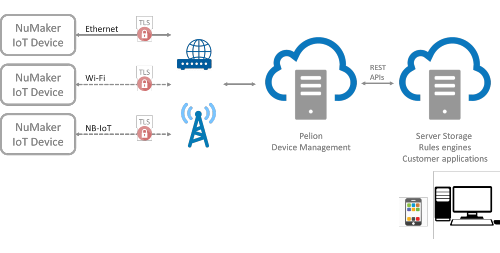 We and the company Cascode located in Great Britain collaborated and released a transceiver reference design for a microcontroller plus 802.15.4 that includes the MAC (Media Access Control) layer. Since M2351 can provide TrustZone® as well as XOM functions, the communication protocol layer can be placed in the secure world or XOM (eXecute-Only memory) based on the program development plan; and since Cascoda’s transceiver ICs (CA8210, CA8211) all include pre-processing of the MAC layer (ROM-based MAC firmware and MAC Co-processor), so M2351 is more than capable for being responsible for post-processing of the MAC layer and processing its upper IP layer and above, including the application layer. The inclusion of MAC pre-processing (Low-MAC Transceiver) provides the following benefits:

We organized the application architectural diagram as shown below: 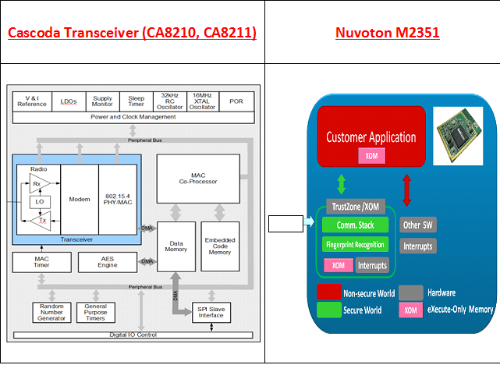 From the figure above we can see that the Cascoda Company developed ROM code based on hardware MAC to support Open Thread protocol; Nuvoton also ported this protocol onto M2351 based on Open Thread. Since there is sufficient resource, M2351 can also run upper layer applications or even RTOS; place these upper layer applications or RTOS into the non-secure world of Trusts® to fully utilize the features of Armv8-M to achieve software security for networked applications. Such a solution can bring the following market opportunities:

This site uses cookies. By continuing to browse the site, you are agreeing to our use of cookies.